Philip C.Hammond, professor of Anthropology at the University of Utah in Salt Lake City, is director of the American Expedition to Petra and has been researching Petra for the last 35 years. In his research he has made an attempt to dispel the myths and legends surrounding the Nabatean Temple of Petra at Jordon, including the various names that have come to be associated to this site over time (such as 'Wadi Musa' - or the 'Valley of Moses' which have no bearing on the history of this site).

The myth about the name 'Valley of Moses' arose because the entrance to the Petra temple (called the Shiq or Sic) is a great cleft in the earth and was once filled with water. People came to believe that it was here that Moses struck the rock to secure water for his wandering people after their flight from Egypt). Interestingly, in Sanskrit 'sic' (सिच्) means 'to irrigate, sprinkle or pour'.

According to Professor Hammond the Nabateans were highly skilled and it was their ability to control the water supply that led to the rise of the city of Petra, creating an artificial oasis in the desert. Nabataeans were able to harness the rainfall and the desert springs through an intricate system of cisterns, pools and waterways that captured and transported water to the city. Where might the Nabateans have acquired such skills?

The Nabtean territory included parts of present day Jordon, Syria, Saudi Arabia and Israel. There are other known Nabtean sites apart from Petra, for example there are the ancient cities of Bosra (Syria), Shivta, Mamshit, Avdat and Haluza (also called Halasa) in Israel, and Hegra in Saudi Arabia. One of the known ancient trade routes between India and the West passed through the Nabtean town of Petra. And it is a possibility that the Nabateans were originally from India and carried their skills from India.

Not much is known about the Nabateans. Their language is extinct and said to be 'like Aramiac strongly influenced by Arabic' however not much light has been shed on what the meaning of the word 'Naba' or 'Nabha' might be in either of these languages. Instead it is through the Sanskrit language and through the knowledge of Indian culture that some sense can be made of the Nabatean site of Petra.

It is recorded in historical annals that the Nabataeans were a Semitic people known at least as early as 312 B.C., inhabiting the region between the Dead Sea and the eastern arm of the Red Sea. There is a passage in the Old Testament which mentions Nebajoth who was the first-born of Ishmael who was the son of Abraham and Sara. Abraham and Sara are sometimes equated with Bramha and Sarasvati of the Vedic tradition. The Nebateans are sometimes traced to Nebajoth.

The second son of Ishmael was named Kedar and his descendants called the Kederites are sometimes regarded as Nabateans themselves, or those who assimilated with the Nebateans. Again, neither Nabajoth nor Kedar are said to have any meaning in the known languages of those times including Aramiac. However, in Sanskrit Nebajoth can be traced to 'Navajyot' (नवज्योत) or 'new light' and 'Kedar' (केदार), of course was the name of Lord Shiva himself. Kedar also means 'paddy' or 'a meadow' in Sanskrit.

The ancient Indian scriptures and Sanskrit sheds some light on the names of Nabatean Gods and Goddesses. First, the word 'nabha' itself may be traced to the Sanskrit 'nabha' (नभ) meaning 'sky' or 'atmosphere'; 'nAbha' (नाभ) means 'central point' or 'navel'.

The name 'Nabha' appears in the names of the descendants of Sri Rama, the Indian God-king, a descendant of the ancient Ikshvaku dynasty. About five generations down the line of Kusha (the son of Sri Rama) we see kings with the names Nabha, Vajranabha and Hirnyanabha. 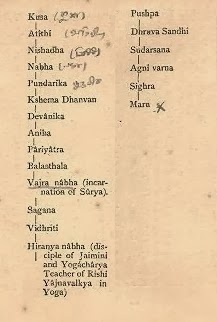 Not much is known about two other sons of whom we find that one is named 'Nabhaga' and another 'Nabha-Garista'. The epics say that the two were knowledgeable ascetics,  and either one or both were deprived of their parental wealth; however where they went and how they lived their lives is not discussed in detail.

Professor C. Hammond has pointed out that one of the known facts about the Nabateans is that they appeared mysteriously in the Nabha region  (Israel, Syria, Saudi Arabia), that they were highly skilled at water management (click here to read how their several thousand year old techniques are now being applied in the desert of Israel). Where the Nabateans acquired their knowledge is not known. Whether Nabhaga's and Nabha-garista's descendants wandered west, and then settled at Petra can only be conjectured but there seems to be a significant connection between Nabatean and Indian culture.

It is known that the Nabatean temples were constructed as an ode to their deities - the chief male deity being 'Dushares' and the female deity 'Al-Uzza'. In the Mahabharata, Sri Krishna is constantly referred to 'that of the Dasarha race'. In fact 'Dasarha' (दशार्ह)is another name of Sri Krishna who was a descendant of the Yadu tribe. The Yadus were the descendants of Manu's daughter Ila, mentioned above. Whether the Nabatean Temple to Dushares has anything to do with Sri Krishna is not known but the name of the temple is a close cognate of Dasarha, one of Sri Krishna's many names.

Al-Uzza was the goddess of the morning and evening star and is regarded as the counterpart of the Indo-European goddess of dawn, Ostara, and the Vedic ‘Usha’ and since all Vedic names have a meaning, so does 'usha' (उषा) - and it means 'dawn' and 'night' both. Uzza is once again a close cognate of Usha.

Some have also associated the name Dusares with the name 'Dasharatha', the name of Sri Rama's father. The names of Rama and Kusha also appear in the Bible - though the history, the events and the chronology of events does not match or is distorted.

Here is a quote on the names Raamah and Rama from Wikipedia:

"Raamah or Rama is a name found in the Bible (Hebrew: רעמה, Ra‛mâh), it means "lofty, exalted, it may also mean "thunder". The name is first mentioned as the fourth son of Cush, who is the son of Ham, who is the son of Noah in Gen. 10:7, and later appears as a country that traded with the Phoenician city-state of Tyre, in Ezek. 27:22.

"It has been connected with Rhammanitae mentioned by Strabo in the southwest Arabian peninsula, and with an Arabian city of Regmah at the head of the Persian Gulf. He is the brother of Nimrod, who founded several cities in Mesopotamia, including Babylon and Nineveh. We know from the inscriptions of ancient Sheba that Raamah's descendants settled near to the land of Havilah to the east of Ophir.

This country of Raamah is usually assumed to be somewhere in the region of Yemen; Sheba was a son of Raamah, and his descendants are often held to be included among the Sabeans. The Yemenites are dark-skinned as are the descendants of their progenitor's eponymous grandfather, Kush or Cush, commonly translated in the Bible as Ethiopia, meaning dark. Dedan, son of Raamah. Apparently a region of the Medina Province of Saudi Arabia."

There are many towns in ancient Nabatea, (now Israel) with the names Ramah. Click here to read the details.

Following are some other ancient Nabtean temples and sites in Israel, Syria, Jordon and Saudi Arabia. Check out the names:

It is quite evident that the name 'Rama' was well known in the Nabtean region, and recognized enough for the Nabteans to name their temples, towns, lakes and mountains after 'Rama'.

Click here to check out the plan of the Temple of Petra. Maybe the plan will shed some more light on who the Nabateans really were. For a discussion on the Sanskrit connection to the word Petra click here.


Suggested Links:
1. Temple of Petra - Jordon: Myth and Reality
2. Ikshvaku Dynasty
3. History of Ancient India by J.P.Mittal
4. Asiatic Researches, Or Transactions of the Society instituted in Bengal, for Inquiring into the History and Antiquities, the Arts, Sciences and Literature of Asia
5. Is Petra a Hindu Temple-complex?
Posted by Neeta Raina at 08:50